Get ready to pay more for gasoline and diesel in California starting next week because of the statewide excise tax to pay for transportation projects. Effective Wednesday, November 1st, the statewide excise tax on gasoline will jump by 12 cents per gallon to 41.7 cents. The excise tax on diesel fuel will jump by 20 cents per gallon to 36 cents, and the sales tax will rise to 13 percent from 9 percent (plus local taxes). Nov. 1st is usually the day when California retailers can start switching from summer to winter gasoline, which does not affect diesel fuel because it’s basically the same mix year-round. According to Michael Blasky, a spokesman for AAA Northern California, the winter blend is cheaper to make, and pump prices historically have dropped about 12 cents a gallon around Nov. 1st, though recently the drop has been closer to 6 cents.

Blasky believes that “you will see a 3- to 5-cent increase next week” in gasoline prices at most stations and “After that, it’s hard to say” because gasoline prices fluctuate constantly based on the price of oil, competition and other factors. The tax increases are part of Senate Bill 1 (SB 1) approved by the Legislature and signed into law by Gov. Jerry Brown in April. SB 1 will also increase vehicle license fees starting Jan. 1st and impose a new annual vehicle registration fee of $100 on zero-emission vehicles starting with model year 2020. Californians already pay about 50 cents a gallon more than the national average for gasoline because of taxes and other factors. SB 1 is expected to generate around $5 billion a year to fund state and local transportation projects ranging from fixing potholes to promoting bicycling to reducing congestion on major highways. So, remember to fill up your gas tanks before Nov. 1st and to drive with the goal of fuel conservation on your mind. 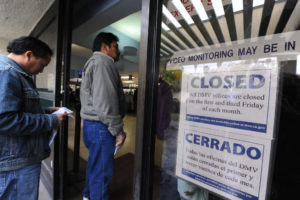 Last month, the California Department of Motor Vehicles announced that[...]