Concern over increasing tuition rates and soaring student debt has driven a rapidly expanding campaign for free public higher education at the local, state, and national level. In California, lawmakers, political candidates and education advocates are among those pushing for ways to get rid of fees and other costs for some students. This fall, San Francisco, for the first time, waived enrollment fees at City College of San Francisco for any resident. “Free college,” is a useful catchall term that encompasses everything from a transitional year without fees at a community college to proposals that would eliminate tuition for every student at every public college or university in the country. Maggie White, a master’s candidate in public administration at California State University, Stanislaus, and president of the California State Student Association, stated:

We could be even more audacious in what we ask for from the state. Students are a lot more successful when they’re not working so hard to meet their basic needs.

Supporters argue that free college could reopen access to a path toward economic stability that is increasingly out of reach for many Americans. Opponents, on the other hand, caution that removing students’ financial responsibility for their education could diminish their incentive to graduate in a timely manner. The campaign of Democratic presidential candidate and Vermont Sen. Bernie Sanders brought the issue to national prominence with the issue being a central tenet of Sanders’ platform, energizing scores of young voters. As the University of California and California State University voted early this year to raise tuition for the first time in six years, legislative Democrats introduced a handful of free college proposals, but none gained much political momentum.

The annual cost of attendance averages about $25,000 at CSU and more than $30,000 at UC, once living expenses are factored in. Though tuition and fees for a California community college student are, at under $1,400 for a full-time load, the cheapest in the nation, they have the fewest financial aid options available for other costs. A Legislative Analyst’s Office report from January found that 53 percent of UC and CSU students graduate with debt averaging $19,500. The report concluded a “debt-free” program for all public university and college students in the state would take another $3.3 billion per year. We will have to wait and see if the free tuition movement continues to gain more traction. 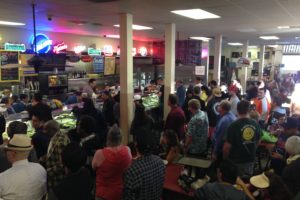 By Jeff Flores The lunchtime meal is being handed its[...]

California rapper, Lil B has decided to drop Hillary Clinton[...]